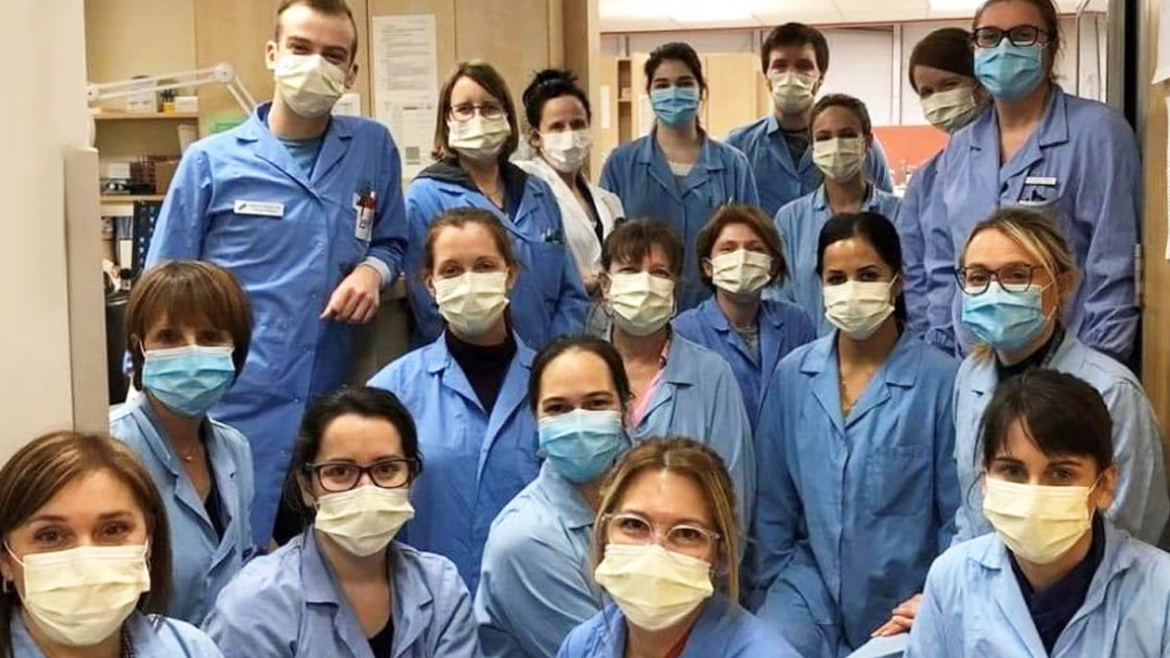 COVID-19 and labs: a (poorly) controlled slide into chaos

COVID-19 and labs: a (poorly) controlled slide into chaos

If you’ve never worked in a medical lab, it’s hard to imagine the alarming circumstances into which graduate medical lab technicians and medical technologists were plunged during the first wave of COVID-19. And the situation only got more dramatic with the second wave.

Lab workers have been under unremitting pressure since the launch of the OPTILAB reform. They’ve had to constantly make up for staff shortages and routinely endure work overload, while scrambling to adjust to new health directives and workplace changes that are all too often introduced at the last minute.

The COVID-19 pandemic hit just as the OPTILAB roll-out was entering its most active phase of implementing concrete changes, at a time when the lab system was in the throes of a major transition and highly vulnerable.

When the public health emergency was declared on March 14, 2020, the health system braced for an influx of hospital admissions, as seen in Europe. A substantial number of regular hospital activities were put on hold for the duration of the pandemic.

After a brief calm before the storm, lab employees were rapidly overloaded with work. They had to manage COVID-19 diagnostic tests in the microbiology department, cope with changes in the organization of work and in the set-up of their workspaces, and decipher unclear health and safety directives. Their day-to-day work, which was already challenging enough, was suddenly complicated by having to handle test samples potentially contaminated by a virus whose characteristics and associated risks were not clearly understood. To add to the pressure, the work had to be done quickly and meticulously. Despite it all, lab personnel weathered the storm with exceptional professionalism and resilience.

It was only after the first wave subsided that the impact of staff shortages became most glaringly apparent.

When lockdown measures were lifted, hospitals were able to resume their regular activities. To ensure that operating rooms and other units could run smoothly, lab personnel had to return to their usual testing work that had been put on hold, and at the same time ramp up COVID-19 testing. Labs played an essential role in achieving both those objectives.

Lab personnel typically face heavier workloads in summer, when they are short-staffed and don’t have enough student trainees. This year, however, the situation became so critical that the APTS and the Ordre professionnel des technologistes médicaux (OPTMQ) raised the flag publicly in July. What would happen when schools reopened and we were struck with a second wave?

The writing was on the wall at that point, and the situation in the lab clusters began to spin out of control. As summer drew to a close, case numbers started to climb – this time in communities all across the province. A second wave that was very different from the first began to emerge. As the demand for COVID-19 screening tests grew, the government pushed for increased testing, without improving the situation in the labs. As a result, the entire system became overwhelmed, causing lengthier wait times for test results.

To comply with the government order for still more testing, the lab clusters’ management teams came up with a number of dubious makeshift solutions concocted on the fly. Some transferred certain microbiology analyses to other lab clusters, while others put these analyses on hold and conducted them after the prescribed time limit for valid test results. Some managers struck emergency deals with private companies to handle the overflow.

What caused the lab clusters to handle the situation so poorly? It all boils down to the health and social service ministry’s stubborn refusal to acknowledge the OPTILAB reform’s failures, the real contributions of Class 4 lab workers, and their pleas for support. The MSSS let the situation deteriorate to a level so critical that the future of public-sector medical labs is now in jeopardy. It’s time the health and social services ministry took action. For starters, it should pay a special COVID premium to the individuals who have been working tirelessly to keep labs operational right from the outset of the health crisis. At very least, this would be a step in the right direction. For input on the next steps, all the MSSS has to do is ask us. We have many more recommendations and solutions to offer.