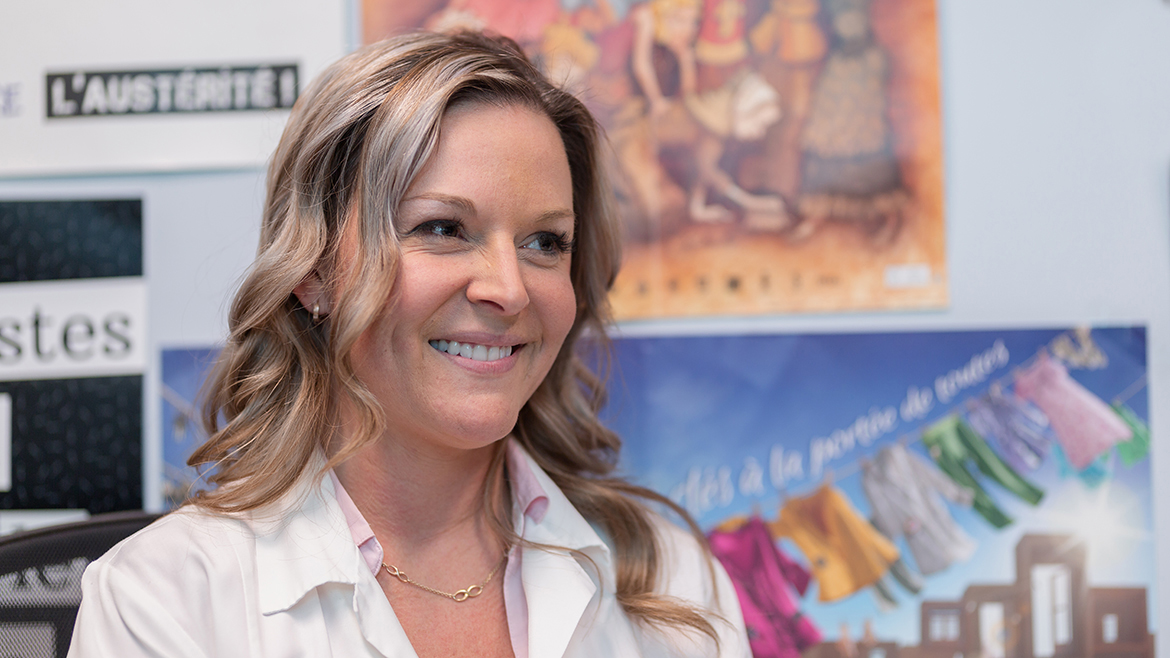 Full-time technologist and video artist in her spare time

Full-time technologist and video artist in her spare time

Exasperated that few people understand what she does as a medical imaging technologist, Marie-Eve Côté decided to put what she calls her “artistic side” to work by making promotional videos about her field.

With funding from the Ordre des technologues en imagerie médicale, en radio-oncologie et en électrophysiologie médicale du Québec (OTIMROEPMQ), Marie-Eve designed three short promotional videos on medical imaging, radiation oncology and medical electrophysiology, each three to four minutes long. She included interviews with other technologists, assistant head technologists and a woman doctor, as well as slow motion shots where we see all of them working with precision, rigour and compassion. In the videos, the president of the Order thanks her members with heartfelt sincerity.

Marie-Eve caught the communications bug when she saw a presentation at a conference that opened her eyes to new horizons connected to her work that offered her the possibility of learning, doing useful video work, and finding greater fulfillment. “I wanted people to learn about the work we do and the absolutely vital role played by technologists in the diagnostic process,” she explained. With help from those close to her, a cameraman and a graphic designer, she worked hard from May to September 2018, devoting evenings and weekends to her project. Her enthusiasm was contagious, and her employer at the Montreal Heart Institute agreed to give her a few days off from her duties to work on it.

The videos were shot in the facilities at the new CHUM, the Montreal Heart Institute and the Montreal Children’s Hospital.

We invite you to watch these videos and see first-hand her portrayal of medical imaging (diagnostic radiology and nuclear medicine), radiation oncology and medical electrophysiology work.

The Order was very pleased with the videos and posted them on its website on November 1 to launch Technologists Week. Hospitals are using them as well, as are colleges that offer medical imaging technology programs.

The videos will also be used during open house events and career fairs at educational institutions. “I hope they inspire young adults to choose our field, which is growing and developing,” said Marie-Eve.

As video director, she wanted to highlight new facets of technologists’ work, including delegated acts such as administering barium enemas, putting in peripherally inserted central catheters (PICC-lines) and performing sonography duties, which can now be performed independently by technologists, without medical supervision. “These technologies help shorten waiting lists and result in quicker diagnoses,” Marie-Eve explained with pride.

The OTIMROEPMQ gave our technologist/video artist free rein and provided support when requested, throughout the process. The Order also reviewed the final cut to make sure everything was in order. Marie-Eve found this collaborative venture fruitful and had no hesitation about heading further projects.

This was a personal initiative that managed to combine the interests of a professional order, employers, educational institutions and a union – in this case the APTS, which was delighted with the visibility the videos give to its members – and to encourage technologists by recognizing their expertise and providing an eloquent portrayal of their work by one of their own.