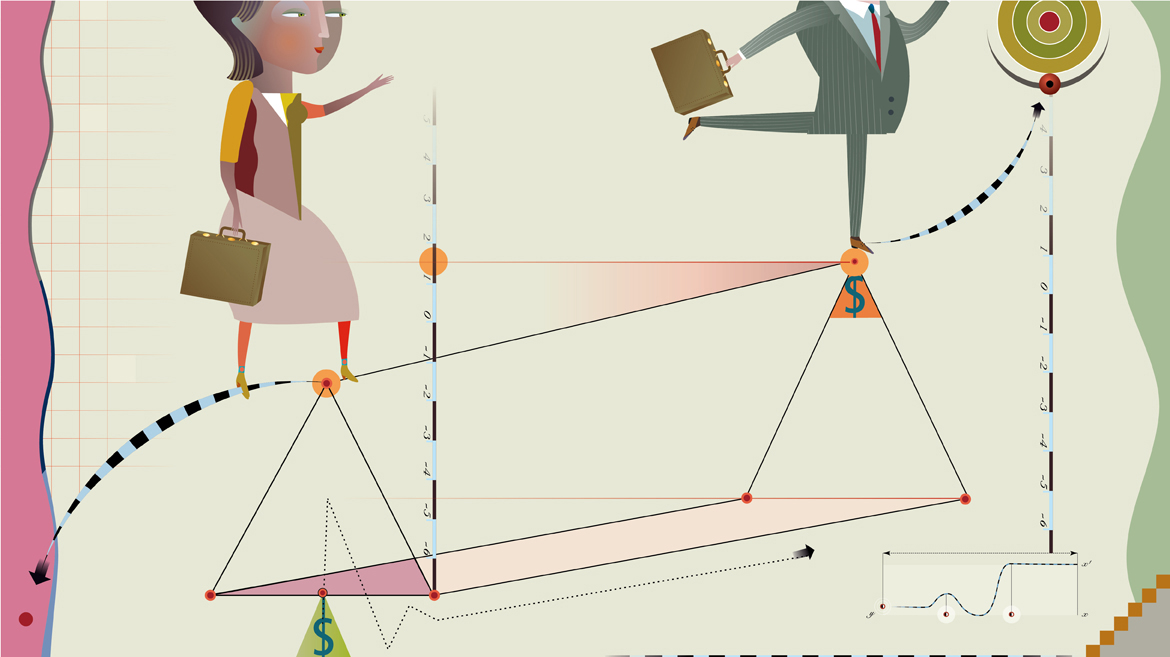 A recent study reveals a 23% pay discrepancy between personnel in the public service (i.e., the civil service, education, and health and social services), 72% of whom are women, and personnel in Crown corporations like Hydro-Québec, Loto-Québec and the Société des alcools du Québec, a majority of whom are men. 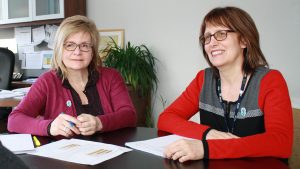 We asked the APTS political officer responsible for feminist action, Marie-Claude Raynault (MCR), and the feminist action co-ordinator, Élaine Girard (ÉG), to fill us in on the study by IRIS, a research and socio-economic information institute, and comment on its findings that were unveiled on February 13.

BlueAPTS: Where did you get the idea of asking IRIS to conduct a study on this issue?

MCR: What started off as an impression became a stronger conviction, based on the results of the past 20 years of negotiations and on the fiscal restraint of successive governments. In applying a feminist analysis, you see that the government views the budgets for health and social services, education, and the civil service as expenses that need to be reduced, regardless of how essential these missions are to society and the major economic benefits they generate throughout Québec… and despite the fact that the women who work in these sectors deserve to be paid fairly, as do the men.

The contrast is striking when it comes time to discuss budget choices in predominantly male sectors, where the allocated budgets are referred to as investments and are seemingly more justified than those for public services. But we are definitely investing in our society when we duly recognize the value of public-sector employees’ work.

BlueAPTS: Why did you ask IRIS to do this study?

MCR: We commissioned IRIS to do the study after consulting a few women researchers who confirmed to us that the phenomenon was poorly documented and needed to be demonstrated. IRIS showed great interest in the project. Also, the use of an outside, reputable organization lends weight and credibility to the findings.

BlueAPTS: Did the findings confirm your feminist intuition?

ÉG: Unfortunately, yes! At 23%, the gap is even bigger than we thought. It’s important to point out that the Crown corporations to which the public service is compared also provide indirect benefits (reimbursement of dues to professional orders, bonuses or paid insurance plans), which are rarely seen in public services. These often hidden benefits widen the gap further.

BlueAPTS: Does this mean that men who work in these “male” sectors are being overpaid?

ÉG: Claiming that a particular group is overpaid has never been the goal. That kind of reasoning benefits no one except employers, who might be tempted to reduce wages to the lowest common denominator. The idea is to show that even though the principle of equality is a core value in Québec, and we have pay equity legislation, women are still earning only 89.8% of men’s average hourly pay. And now we’re learning that within the Québec government apparatus itself, the pay gap between predominantly male and predominantly female sectors is even wider.

BlueAPTS: But won’t the cost of eliminating this gap be enormous?

MCR: People who work in public services shouldn’t have to put up with wage discrimination just because they’ve chosen to work in fields that are an extension of women’s unpaid work (care and teaching) historically, before women entered the job market en masse. These jobs demand skills that were and still are undervalued. The price of working in fields once considered to be the vocation of women has now been calculated. It can no longer be ignored. 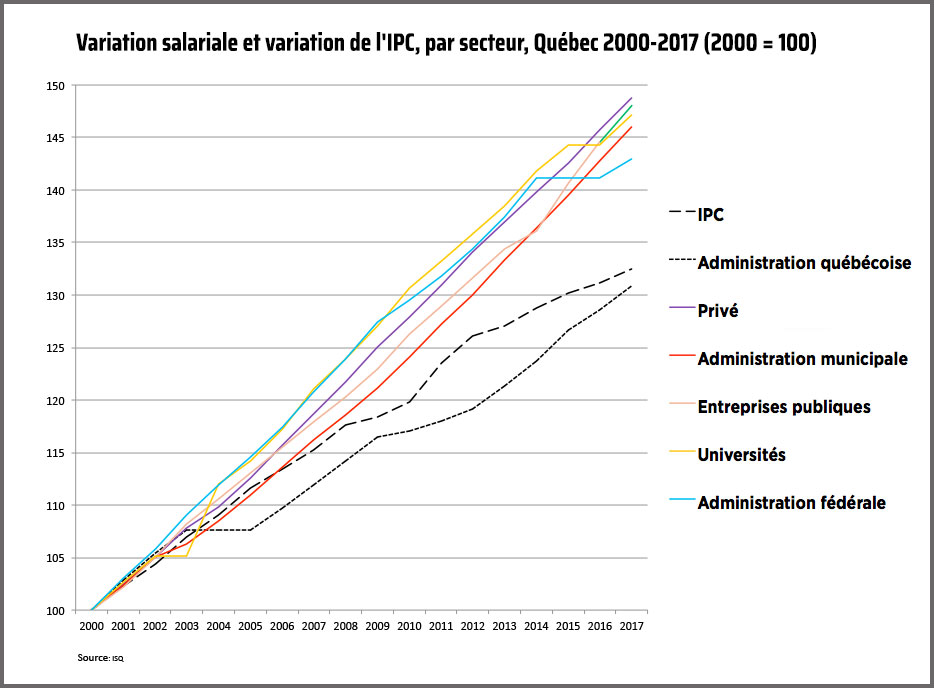 The study also reveals that this is the only sector in Québec where workers have experienced a decline in their standard of living over the past two decades. This gap will only widen if nothing is done. When it’s a question of remunerating Québec’s 22,000 physicians, there’s plenty of money, but not much for the 543,600 working women and men and their families. This injustice should no longer be tolerated by women.

BlueAPTS: What repercussions do you think this study will have?

MCR: We hope it will help to debunk the preconceived notion that public employees enjoy enviable working conditions and salaries. Now that proof of discrimination has been demonstrated, we expect the government to seriously examine ways of evaluating and remunerating its employees equitably, and take steps to eliminate gender-based wage discrimination.

As the legislator, the government must lead by example and make sure that any lingering pay disparities in the public sector are eradicated – for the benefit of women workers and also for the men working alongside them in these jobs, who are also affected by the wage disadvantage. If Québec’s biggest employer fails to take measures to eliminate wage discrimination, what hope do we have that other women workers will obtain justice? 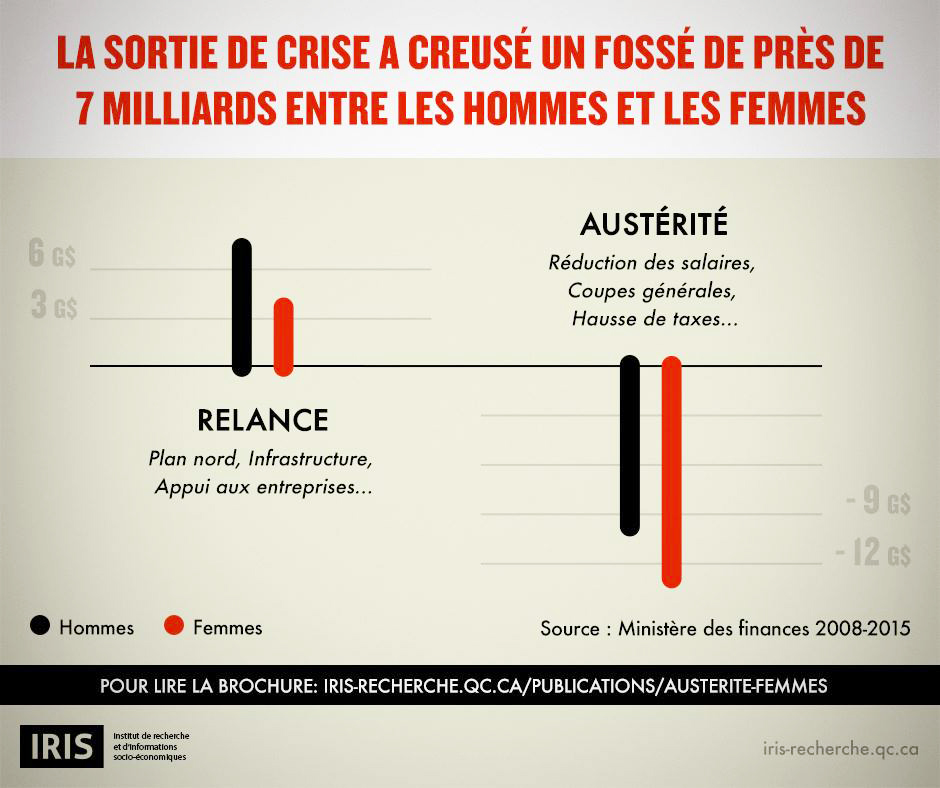 IRIS, an independent, progressive research and information institute, was founded in the fall of 2000. Its research team stakes out its positions on the major socioeconomic issues of the day and provides counter-arguments to the viewpoints defended by the economic elites.