The need for social change, by the numbers

The need for social change, by the numbers

Over the past two years, the APTS has been working to develop a new political platform. The second Carrefour des idées conference, Comprendre pour choisir (Understanding so we can choose), was held on May 5 and 6 as part of this process. Presentations and discussions were intended to help us take a step back and look at the overall context as we think about the best way to move forward. Here’s a recap of the opening talk by Damien Contandriopoulos, associate professor at the Faculté des sciences infirmières of the Université de Montréal. 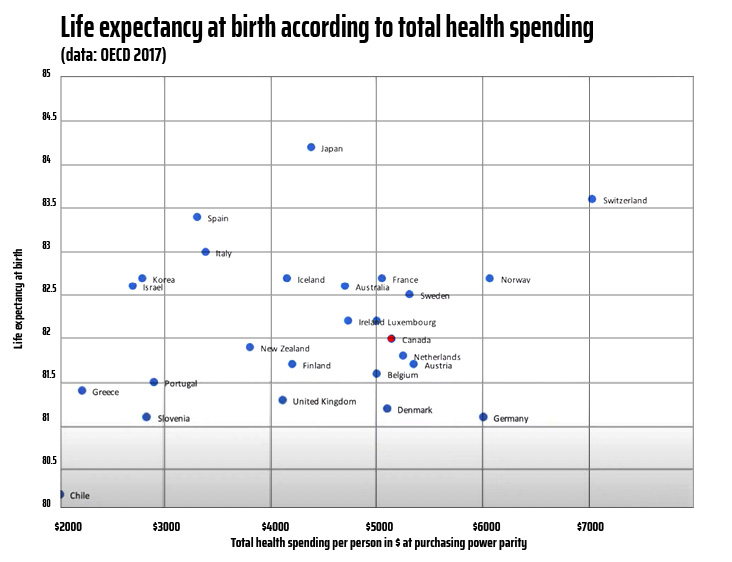 Canada’s overall performance suffers because of the way its Indigenous communities are treated. Their access to care is grossly inadequate. If these communities were provided with the same access as the rest of the population, we would probably see our numbers improve to be on par with countries like Australia and Sweden. Still, the fact remains that healthcare spending is not the most important factor in population health.

When we look at years of life lost to cancer, for instance, there’s no correlation between healthcare investments and health outcomes. There, we perform similarly to countries without our financial means, such as Chile and Colombia. More money doesn’t automatically mean needs are better met. 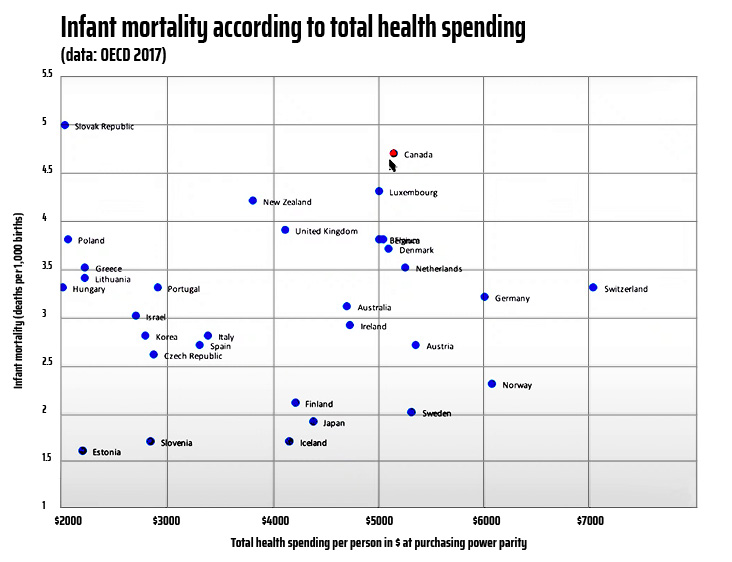 So what are the factors that affect population health?

The factors with the greatest impact on health lie outside the health sector altogether. Things like taxation laws that determine distribution of wealth, occupational health and safety laws that prevent work-related accidents and disease, urban planning that prioritizes green spaces, playgrounds, less polluting forms of transportation – these are the decisive factors that determine whether population health will improve. That’s what can change the world.Outside of these issues, the healthcare system should be there to meet the expectations of the population and address their concerns when problems arise. But that only works if the system is accessible.

Does our current healthcare system meet Quebecers’ expectations, in your opinion?

Our total healthcare spending per capita has doubled in real dollars since 1997, but Quebecers certainly aren’t twice as satisfied. Their expectations continue to increase, and Québec healthcare spending has followed the same upward trajectory despite budget control initiatives from various governments. In the long term, budget cuts have had no impact – they’ve always been neutralized by subsequent spending.

So it seems like there are forces within the system itself driving this increase in spending?

Exactly. One force that’s well-documented is the rising cost of medication. Another is increasing pay for doctors. Québec has more doctors per person than ever before, but the growing majority are specialists. It’s been proven that healthcare systems need a majority of family doctors in order to respond to the needs of the population, and yet medical specialist salaries have doubled over the past 10 years. This deprives other sectors of investments that would be more effective in improving people’s health.

We should be making sure that our investments reflect our values as a society. Currently, they don’t. Unions have an important role to play here: they help fight for better living conditions, which are among the fundamental determinants of health. No sickness is as deadly as poverty – it’s the number one factor limiting life expectancy.

You’re seeing trends that will have major effects on the healthcare system. What’s dangerous about these trends, and how can we reverse them?

The aging population has been on our radar for decades, and it’s not just a talking point. In twenty years, Québec’s most populous age group will be between 70 and 85. This change will lead to major increases in healthcare costs and seniors’ housing needs. If we don’t take the necessary measures now, we’ll be facing a major crisis. Québec will not have enough housing. And COVID-19 has shown us that our current model is not viable.

That’s why we need to adapt housing and improve the availability of home care services. This approach has already been successful in a number of other countries.

The other half of the solution lies in evaluating the appropriateness of different types of care. We offer too many expensive but essentially unproductive services. For instance, we have decreased the minimum threshold for diagnosing common metabolic diseases such as high blood pressure, diabetes and high cholesterol. The demand for care has increased as a result, leading to enormous expenditure with no demonstrated benefit. Québec’s current investments are simply not optimized to have real positive effects on Quebecers’ health.

Québec’s approach to managing human resources presents another significant challenge. It’s bureaucratic, authoritarian and patronizing, and it’s contributing to the exodus of healthcare employees. And yet we’ve been maintaining this approach for the past ten to fifteen years, always with the same disastrous results. We must reform the system to be more democratic and attentive to employees’ needs. Otherwise, Québec health care will remain paralyzed by a chronic inability to organize the system so that it’s more effective and can actually meet demand.