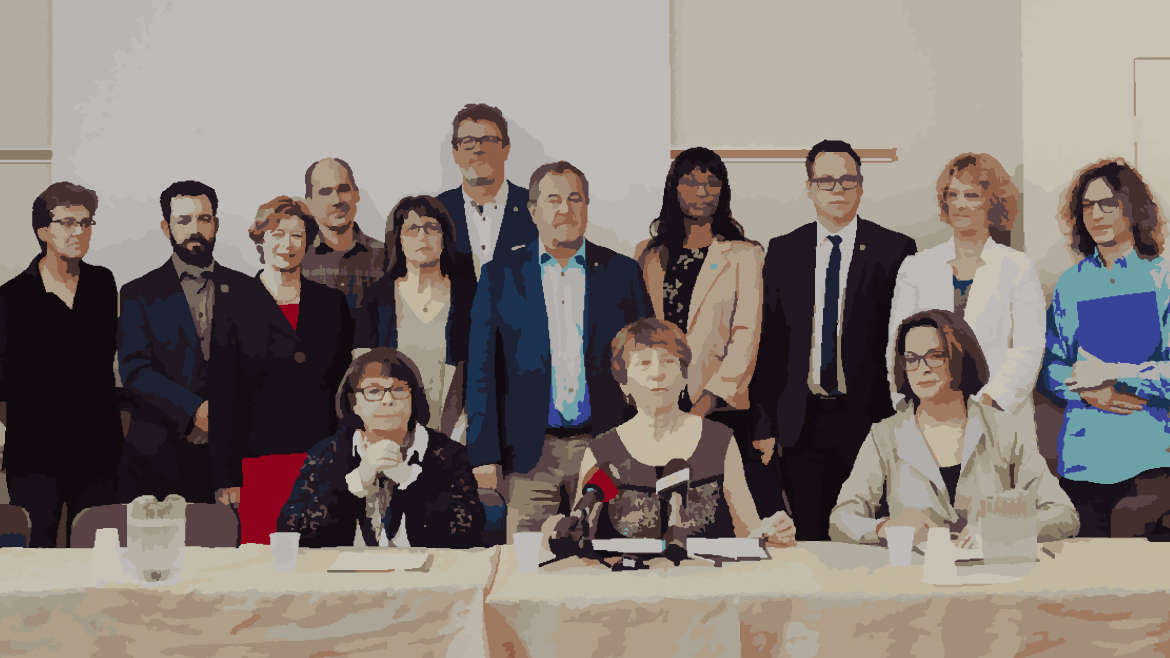 The APTS supports the Mouvement Démocratie Nouvelle’s campaign urging the Québec government to keep its promise to reform the electoral system. We asked the APTS’s political officer responsible for feminist action to provide an overview of the feminist vision behind our support.

BlueAPTS: Why is it important to reform the electoral system?

Marie-Claude Raynault: We have to seize this opportunity to reform the electoral system if we want to achieve gender parity in the National Assembly and ensure that it is maintained. Québec as a whole has much to gain from this because the representation gap impacts the decisions being made. Having a high percentage of women elected to public office can play a role in adopting social policies that are beneficial to everyone.

A record number of women were elected to the National Assembly in the last provincial election. How is electoral reform going to help achieve parity goals?

The National Assembly is closer than it’s ever been to gender parity. Women now make up 42% of all MNAs, finally breaking the historical record of 30% representation in past decades. Even when women made up 44% of Cabinet in 2007, they only represented 28.8% of the MNAs. These numbers illustrate that relying solely on the parties’ goodwill to present more women candidates is not enough. Concrete and verifiable obligations have to be imposed through legislation, to achieve ongoing gender parity so that we don’t have to rely strictly on the parties’ commitment, which tends to fluctuate from one election to another.

Absolutely. Adopting an electoral system based on compensatory mixed-member proportional representation will help strike a balance between our democratic, feminist and anti-racism objectives, because that kind of system ensures that each vote counts.

Practically speaking, what mechanisms will this system use to ensure that women don’t lose ground?

The parties should present closed lists, half of which would start with a woman and the other half with a man. The lists should also include gender-balanced constituency seats made up of both women and men at a rate of 45-55%. Furthermore, the Chief Electoral Officer should be able to require that the list seats and constituency seats comply with the rules on gender parity.

What actions did the APTS take to support the campaign to promote the electoral reform?

On May 26, the APTS took part in a press conference, jointly held by the Mouvement Démocratie Nouvelle and the Groupe Femmes, Politique et Démocratie to issue a public declaration calling on the government to make parity an objective of Québec’s electoral system. The declaration specified a number of recommendations that included taking diversity into account. It was signed by a broad coalition of organizations.

At the press conference, the coalition reminded Premier Legault of his campaign promise to reform Québec’s electoral system to ensure better representation of women at the National Assembly. The Groupe Femmes, Politique et Démocratie outlined the specific recommendations mentioned above to help achieve our goal of parity. We’re committed to this. And even though the caucus is divided on this matter, we are calling for a bill on parity to be introduced in the fall of 2019, as promised.

APTS support for this issue is directly tied to its own efforts to ensure that the composition of its decision-making bodies reflects its members, 86% of whom are women. For more information, see the discussion paper on The APTS and Equitable Representation.

How do the other parties feel about the reform?

Technically, they’re all in favour. The leaders and spokespersons for the Parti Québécois, Coalition Avenir Québec, Québec solidaire and the Parti vert du Québec all signed an agreement on May 9, 2018 to reform the electoral system in order to establish a more proportional system in Québec. The four parties undertook to work together to establish a compensatory mixed-member proportional electoral system with regional lists. Since it was clear that one of the signatory parties would form the next government, the agreement provided that a bill in favour of the reform would be introduced by October 1, 2019, at the latest.

The agreement came as the result of an extensive public consultation campaign conducted by the Mouvement Démocratie Nouvelle in the fall of 2017, during which citizens’ forums were held in Montréal, Saguenay, Gatineau, Rimouski, Trois-Rivières and Québec City. A detailed report was issued following these forums.

I invite anyone interested in this matter to visit Chaque voix compte.com, a website that provides numerous tools to raise awareness on proportional representation for our electoral system.